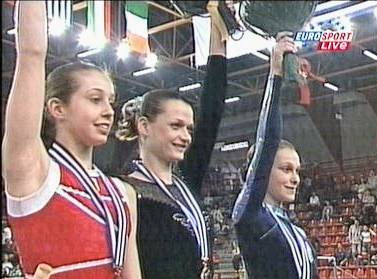 Verona van de Leur is a retired Dutch artistic gymnast. She was named Dutch Sportswoman of the Year in 2002 after winning 5 medals at the European Championships, including the all-around silver medal behind Svetlana Khorkina. Later that same year she won the silver medal on floor exercise at the world championships, and short after the gold medal on floor during the World Cup Finale and two bronze medals. Verona retired from gymnastics in 2008.

Van de Leur, born in Gouda, South Holland, the Netherlands, began with gymnastic at 5 years of age at gym T.O.O.S. Waddinxveen. At the age of 9, she started to train at Pro Patria in Zoetermeer.

In the year 2000, she was for the first time, Junior Dutch all-around champion and won three event finals. One year later, in 2001, she was the Dutch all-around (senior)  champion. With the Dutch team she surprising took the fifth place in the World Championship in Ghent. This performance made them the Dutch sports team of the year 2001. One year later they become for the second time “Dutch Sports Team of the Year”. 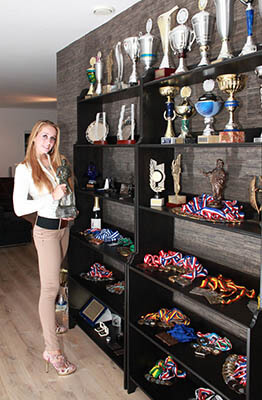 The most decorated Dutch gymnast

In 2002 Van de Leur won five medals at the European Championship in Patras, Greece. The Dutch team won the silver medal an Van de Leur won the silver medal in all-around competition in the 2002 European Championship behind Svetlana Khorkina.[3] She also won a silver medal on beam and a bronze medal on floor exercise. Many thought[who?] Verona should have won gold on the floor exercise finals, but by a mistake of the jury took her 1/10 point that they eventually had to settle for a 3rd place. At the world championships in Debrecen, Hungary, she won silver on the floor exercise during the World Cup Finals that same year she won gold on this unit. She was elected Dutch Sportswoman of the Year and once again they were sports team of the year.

Van de Leur and Renske Endel were drawn as a reserve for the World Cup of 2003 in Anaheim and the Dutch team was not placed among the top twelve. Therefore, the gymnast didn’t qualify for the Olympics in Athens. Then it came to a rift between her coach Frank and Van de Leur, leading her to move to The Hazenkamp in Nijmegen, the club of trainer Boris Orlov. In 2007, Van de Leur won the Dutch all-around champions for the fourth time. At the National Championships in Nijmegen she also won gold on beam and floor exercise and bronze on bars.

By continuing to use the site, you agree to the use of cookies. more information